As anyone who knows me knows, I’ve been crazy busy selling things on FB.  It started as my way to put the family building days behind us.  I had been re-thinking my thoughts on having a third baby for obvious reasons (life is easy with two, sleepless nights, frustrating days, etc.), but when Dr. H advised against it due to my uterine situation, I went into purge mode.  I saw no reason to keep those things around because they’re just taking up space for no good reason.  I’d heard about selling stuff on FB, but I had no idea how it would go.

It’s gone great.  You should see my house!

In February, my aunt asked me if we knew of any short-term leases in our city because her daughter was working hard at acquiring an awesome internship for the summer (side-note, my cousin is insanely talented in design and art, and is highly regarded so we knew she’d get the gig).  Of course I offered up our basement because duh – I’m not letting them spend a dime on rent if they don’t need or want to.  It was February, so we figured we had “lots of time” to get ready.  I was already in purge mode so we figured I’d just keep on going and eventually, the 5th bedroom would be cleaned out and ready for her by summer.

My cousin is staying with us for 8 weeks, and the day she leaves, my Australian comes to spend 10 days with us – so 9.5 solid weeks of having a house guest begins next Tuesday.  Needless to say, we knew we would have space for them, but we also knew it would take a lot of work to get things ready.  This work fell solely on me because the crap in that room was all mine.  We had a huge “chicken before the egg” situation because we needed to free up space to move my crap into, but how were we going to free up space when we weren’t sure what all had to go and where it had to go?

The baby clothes tubs were already out in the living room because I was prepping them for sale, but so many other things had to go too.  Because my FB sales were going great with baby clothes and gear, I decided to tackle the pantry first (odd, I know, but it was a serious problem and I needed to know what from there, had to go downstairs or in the garage before I could figure out what from the basement would have to be sold/tossed out or kept).  The pantry was easy – the big things sold in minutes (bread maker, fryer, cake pans) and it’s been in tip-top shape for months now, with no new accumulation of junk in there.  That’s a HUGE win!

Like I said, baby gear was flying out of our house so the garage shelves were being cleaned out almost daily.  We had my grandma’s old silver sitting out there so I figured, let’s sell that too.  (All of the family had already gone through it and I was tasked with taking care of the rest.)  The silver didn’t sell quickly, but the biggest piece sold and the rest takes up a box, so we’re good with that!  We delivered the last of the things my family members wanted, so that freed up about 2 Rub.berm.ade 14 gallon tubs.  The rest of the garage is Hottie’s job – I’ve done what I can do!

I started tackling the 5th bedroom and sold most of my craft stuff within hours of posting them, and that freed up 2 tubs of stuff.  Slowly, the room was cleared out and I finally went through the filing cabinet to decide what to keep, and what to shred, last week.  A huge filing cabinet’s inhabitants were reduced to just one tub of things to keep.  With that done, Hottie said, “sell that cabinet.”  It sold within 5 minutes for $20.  Oh, the space!

We have a sofa sleeper that we have in our basement that guests sleep on, but we just couldn’t expect these ladies to sleep in a living room for 9+ weeks, so our goal was to get that 5th room cleaned out and move the sofa sleeper into there.  As I was doing all of my work, Hottie was remodeling our bathroom in the basement so that the girls had a nice place to shower, clean up, etc.  BOTH ROOMS ARE DONE and we moved the sofa sleeper in yesterday!  It is never coming out of there!  (That’s my treadmill folded up – that’s going to be a pain in my ass, but it’s only 10 weeks!) 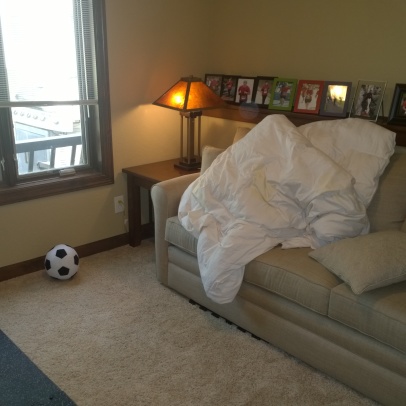 The cherry on this sundae, though, is the kids’ new play space in the basement!  We have had dreams of them having their own space if we could just get rid of our stuff.  Well, we got rid of a lot of crap and now they have their space where the sofa used to be!  It’s awesome! 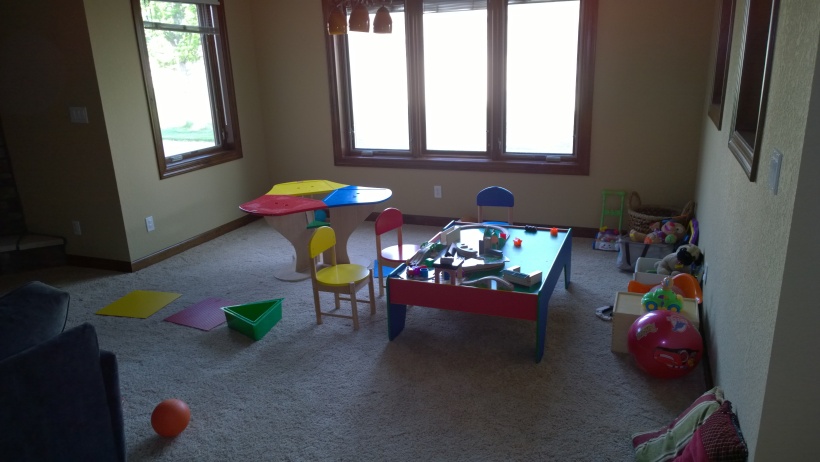 So with all of my hard work (even Hottie credits me for this all being done), the kids have a new play space, their book nook is ready (yay!!!!!!  Another dream of ours!), the store room is only inhabited with things we REALLY want to keep, the garage has space for things that actually belong in a garage, we have a proper guest room which is also an awesome den for us when we don’t have guests (and I still have my treadmill in there – a requirement!), AND we’ve made almost $5,000 ($4,844 to be exact, but we’ll cross that $5,000 line easily with selling 18-24 month clothes, the breast pump, and some more furniture pieces).

I am so happy, I can hardly contain myself!

So what all did we get rid of?  Here is the LONG list (“tub” means a Rub.berma.de 14 gallon roug.hnec.k tote):

So 44 tubs and then all of these things:

My house is clean!

12 thoughts on “Winding it Down”