Summer camps ended on August 12th and the final pool closed on August 21st. Turns out, all of those camp counselors and lifeguards want a few days of relaxation before returning to school the week of 8/22. When you parent kids who start school after Labor Day, you don’t think of such things.

The final 3 weeks between camp-end and school starting were rough. We were all pretty tired of each other and it was too hot to do outdoor activities after 11:00 AM. The kids watched too much TV as my fuse got shorter and shorter. Next year will be better since Matthew will start kindergarten the same week as the lifeguards and camp counselors!

This morning, we were ALL ready to get back to business as usual. Matthew proclaimed his excitement with smiles and laughter and Bryson was upset that he had a delayed start rather than starting at the same time Matthew did. Everyone went into their classrooms happily as I drove off happily to listen to a podcast (too hot here to run). Structure and routine are so wonderful!

Both boys had great days and Bryson had so much fun, he fell asleep on the drive home. They’re already making me promise that they get to go back tomorrow! 😁 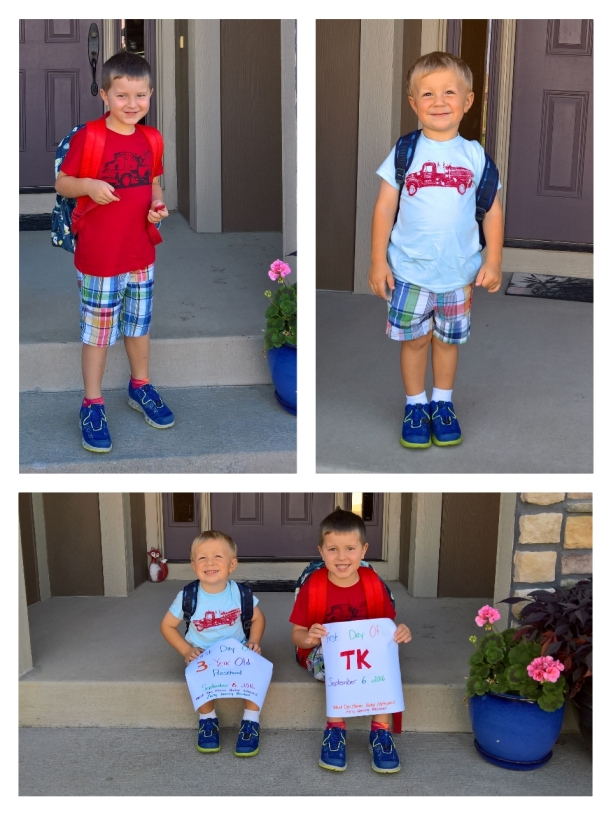 We took a family trip this past week and it was terrific!  We rented a cabin at Mahoney State Park in Nebraska and it was like being at summer camp.  I can’t wait to go back next summer!

Here is my photo collection from 4 days with limited TV, hot weather, and an abundance of activities with the kids!  They’re in reverse order, but it doesn’t matter  🙂 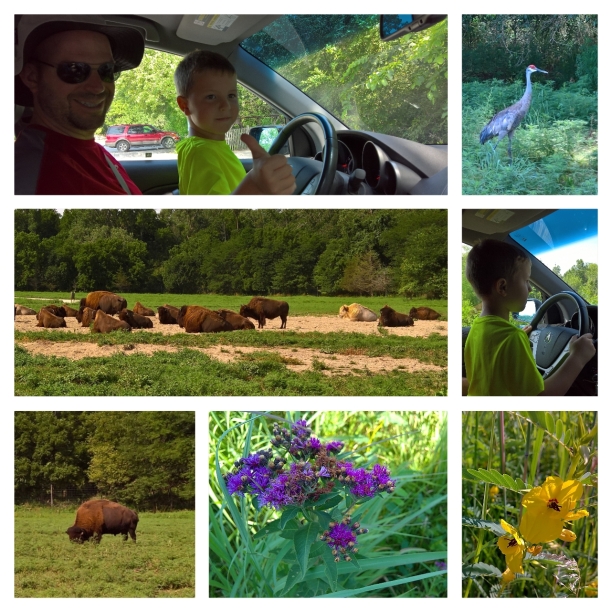 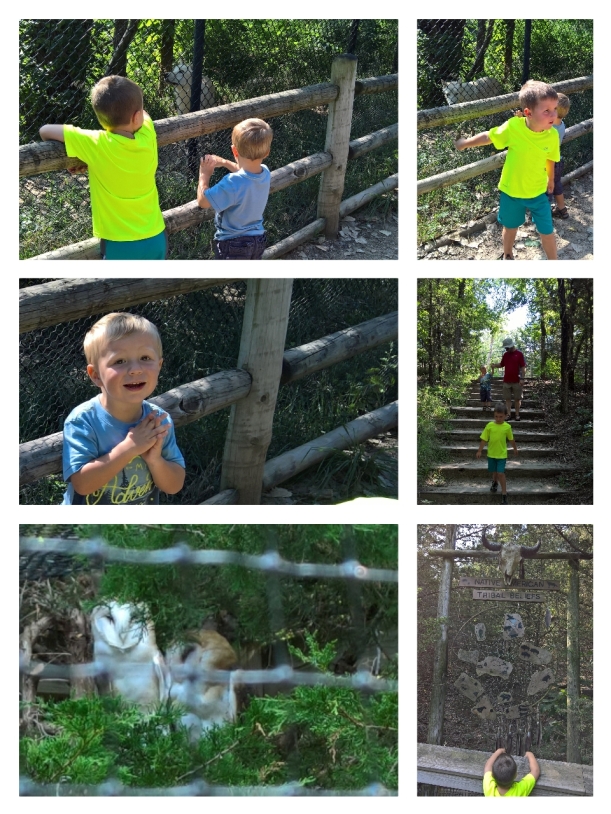 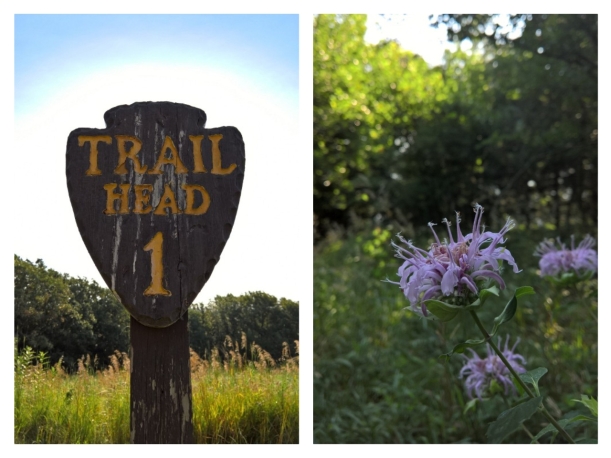 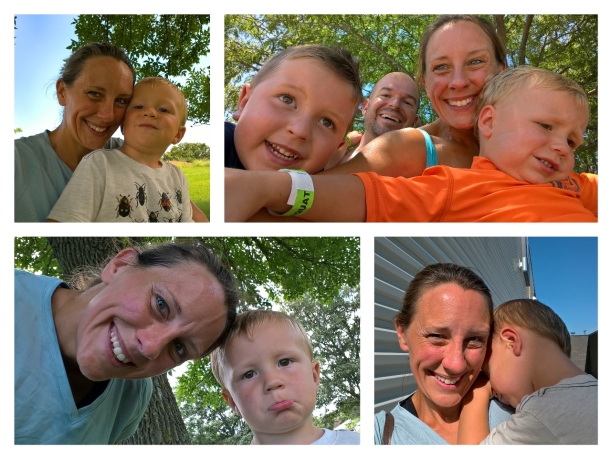 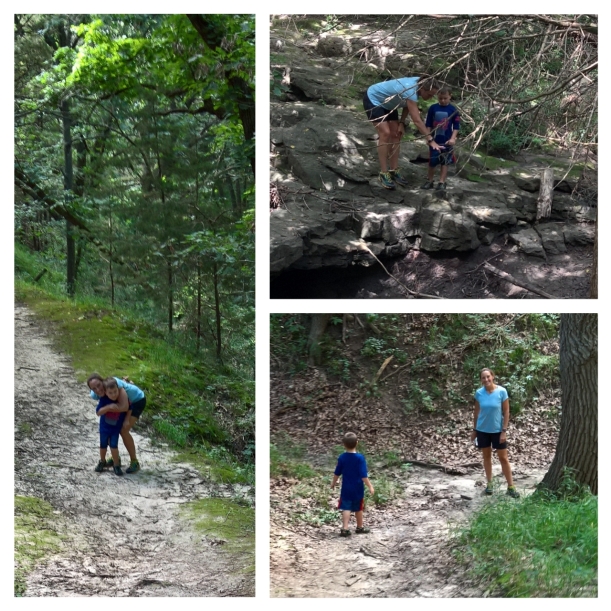 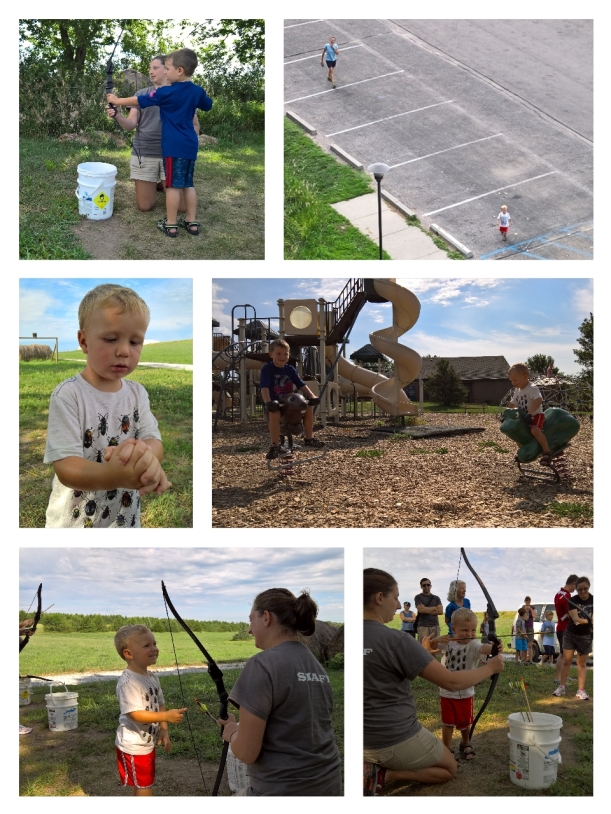 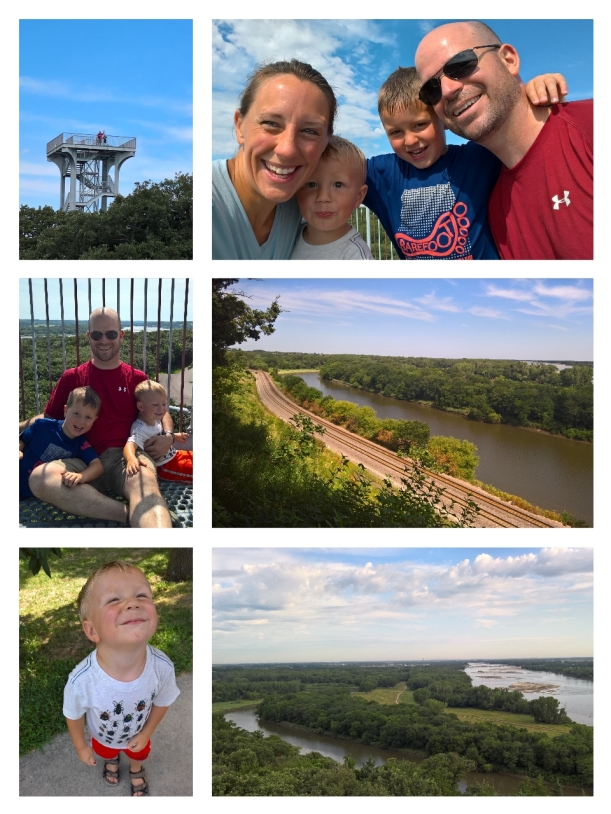 I’m not one to toot my own horn (aside from my fitness blog which is more of a diary), or my kids’ horns (you’ll never hear me say that they “rocked” anything). But today, I did something completely selfless as a mom. It’s hotter than shit right now (“real feel” of 98*) and on our way home, after doctor appointments and a food truck outdoor lunch, the boys asked to stop at the park.

“No, guys, It’s hotter than shit outside.”

And I thought, “what do you care if you have to sit outside for 20 minutes while they play?”

(They were more than happy to leave after 15 minutes, thank God!)

We started the boys on Star Wars last weekend for their birthdays. Right now, we’re watching “Return of the Jedi” and they are so excited! It’s fun to hear them talk about the characters they got to know in the first two movies (episodes #4 and #5) and start putting together the overall plot. I am reliving a big part of my childhood through them, and it feels really good! ❤

Over the weekend, we celebrated both Matthew’s and Bryson’s birthdays. Matthew, for the last 12 months, had said that he didn’t want a birthday or a party.  So, I put a very small party together because I couldn’t NOT have a party for Bryson and I knew that Matthew would, ultimately, end up wanting one if his brother had one.

I did not go crazy this year at all. The only thing I was over the top on was, of course, the cake. Besides that, there were no themes, no balloons, no decorations, no planned activities, etc. and you know what? It was perfect. I invited 16 kids between the two boys and we ended up with 12 coming, so 14 kids total with our boys included. Totally manageable.  We put a movie on in the theater room and setup the bounce house in the basement, and much to my surprise, most of the kids were perfectly happy eating their popcorn and watching the movie.  🙂  We did make the kids hot dogs and the girls ate while the boys did not, and we catered real food for the adults.  We’re still working on the catering leftovers, which was part of the plan.  HA!

Matthew is not a cake guy.  Actually, neither is Bryson.  But Bryson will humor me by asking for a cake while Matthew straight up told me, “I don’t want a cake, Mom.”  OK.  I got to work on the cake plan for Bryson (the boy loves firetrucks!!!) and convinced Matthew that a cookie cake would be a good idea for him.  I spent so much time planning the firetruck cake that I spaced off ordering the cookie cake.  I figured that I’d be able to get it same-day, but that was not smart given that the party was at noon on a Saturday and the cookie places opened at 10:00.  I was lucky, and Cookies By Design had one in stock and fresh baked from the night before.  I had a happy 5 year-old! 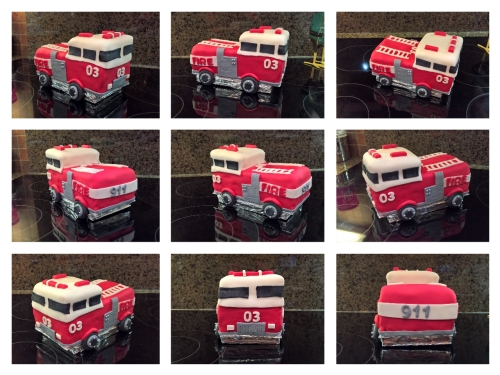 Prior to the party on Saturday, we celebrated Matthew’s birthday (Friday) with our tradition of letting him decorate his own cake for breakfast (freshly whipped up buttercream!!!), opening presents (a scooter and a keyboard), finishing up a week of swimming lessons (the kid is a fish), eating lunch where he wanted (Chipotle), going to the pool with Daddy, eating pizza at his favorite place for dinner, and watching Star Wars for the FIRST TIME EVER!

Cake decorating is our tradition!

Dinner with an ice cream dessert from the pizza shop owners!

Bryson’s big day was the day of the party so the morning was rushed.  He, too, decorated his own birthday cake for breakfast with a fresh batch of buttercream and opened his presents (not his real presents because that is coming on Wednesday) before our guests arrived.  He had a great time at the party and took a nap in my arms in my bed afterwards.  It was bliss!  Because of his nap, he was all set for a late night so we watched “The Empire Strikes Back” in the theater room with the boys.  Bryson was begging to go to bed 10 minutes before the movie was over so I gave him his wish.  🙂 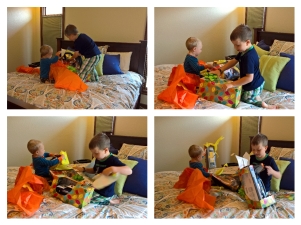 Get those presents open!

Another year has come and gone and we now have a 3 year-old and a 5 year-old.  Bryson seems older, all of a sudden, and Matthew looks older to me.  Bryson gave me the gift of being potty trained ON HIS BIRTHDAY so I’m super excited!  That only took 4 weeks.  HA!  (There was a small accident today but it was understandable (was pouring water from the fridge and well, you know, running water).)

We have two little boys.

We’re on vacation, and just around the corner is the local donut joint. My boys are off to fetch donuts right now… I’m anxious to see which ones make it back to the condo and which ones  have left evidence on the boys’ faces (sprinkles? chocolate icing? cream filling?)! 🍩❤😋😊

All three of my boys raced today, and for the first time all year, I didn’t. It was my turn to watch the boys while Hottie ran a quick 5k. It was fun to hang with the boys and cheer Daddy on with them!

We were told that there was no kids race after the 5k, so I let the boys run the long finish with Hottie. Once they were done and eating their gelato, the race organizers announced the kids race. Ok! We took our two tired boys to the race start and had them take another go at it. Matthew ran hard again and Bryson took his time… he needed a nap! They both crossed the finish and got their chocolate medal!

We came home with a bag of solid chocolates, 2 chocolate medals, a dark chocolate bar with bacon and caramel, a coupon for a pound of chocolate bon bons, and tummies full of dark chocolate gelato and chocolate covered bananas. This is, by far, the best SWAG we’ve gotten from a 5k… which is why we like to do it with the kids!

Now I’m off to hide all of that chocolate!

My good lord, I’ve been gone a long time.  Both of my blogs have been very neglected lately.  I feel like I have no time to sit down and really write anymore.  I figure I should be taking to the micro-blog Mondays as that would be a great first step to getting back here more regularly, but I’m not even sure that feels do-able right now.

Things are good here, just busy!  I am training for 3 half marathons scattered throughout a three month span (April 30, June 4, July 23) and that keeps me working out and focused.  I’m trying to lift weights and do PiYo at least twice a week to stay strong and loose.  I’ve painted another painting which will go in our bedroom once framed and I love it!  I’ve been selling stuff on FB the last 3 days so that I can do it all at once and then be done for a while.  Man alive, that takes a lot of time but is worth it – $975 in 72 hours.  It’s hard not to do it when there’s that kind of money to be made.  Hottie is traveling quite a bit right now which is fine but at the end of the day, I just want to sit and do nothing.

The boys are doing great!  Matthew is doing awesome with his speech and in school.  He NEVER complains about going to school, something that truly amazes me after 2.5 years of going.  Bryson loves school and also never complains, but that’s expected right now because it’s still sort of fresh and exciting.  😉  They are both signed up for camps this summer and Matthew is doing 8 weeks of it and I think Bryson is doing 5 weeks (he has to be 3 to go, and that won’t happen until the end of June).  We are potty training Bryson and if he’s naked, he does great.  There has not been a single naked accident even on the first day.  but if you put undies or a pull-up on the kid, he uses that.  It’s aggravating.  My deadline is his first day of camp in July, so there is time.  Matthew is into science and information in general, and Bryson is seriously into puzzles (I just ordered more from Amazon).  Everything is great on the kid front!

I’m scheduling things to succeed with my “Year 41 Plan” and now that I am 40 (oh yeah, that happened on St. Patrick’s Day!), that plan seems a little daunting.  HA!  But I’ll stick to it!  I’m excited about quite a bit of it, actually!

So that’s what’s going on.  Not a lot, just a lot of the same.  🙂  Life has leveled out a bit now that Bryson is approaching 3 and I hope it just keeps getting easier.  I know, I’m kidding myself 😉

Matthew loves cake pops from Starb.ucks, so when I saw this cake pop maker on clearance for $10.00, I surprised him with it! Bryson’s at school and we’re learning how to use this thing! We’re getting the hang of it. 😉 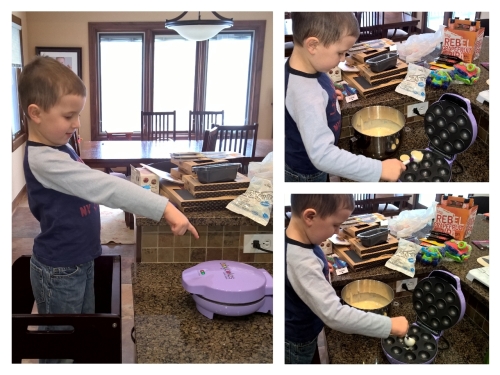 Quick update – Bryson and I decorated another dozen this afternoon and used my experience from the first round to make them pretty darned presentable!  Now, what do we do with all of these cake pops? 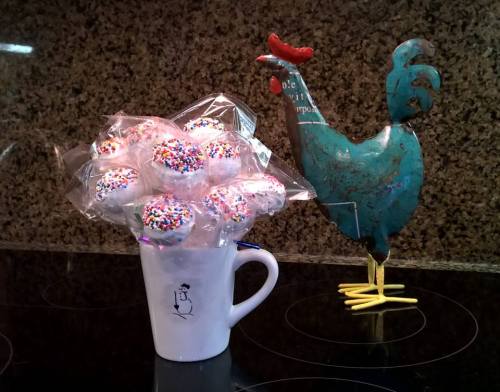 Santa arrived at 2:23 this morning, with a fire station, a solar system, walkie talkies, and a massive supply of tape and sponge brushes in tow. These are BIG surprises, because the only thing requested in that list was the set of walkie talkies. Matthew explained to us that Santa makes toys out of wood – not plastic – and that they aren’t bought at the store. So… That made it super fun for us to get creative.

Best Christmas so far by a long shot. Both boys are all in on the Santa thing!