I’ve droned on and on and on and on about Matthew’s sleep, and our challenges with it, on my blog.  I kept a very detailed account of our experience with the Fer.ber method after trying everything else to help him sleep.  I’ve vented about naps and his attempts to stop napping altogether.  I’ve talked too much about bedtime routines taking  too damned long each night and my frustration with having to lay with him for 30-60 minutes each and every night until he falls asleep.  To say that Matthew has been a challenge in the sleep department is an understatement (until you talk to someone who’s had a more difficult time with babies/toddlers and sleep, but it’s all relative).

It’s true that Matthew sleeps, usually uninterrupted, for 9-10.5 hours each night.  That’s a great thing!  But the truth is, 9-10.5 hours of sleep just isn’t enough for a kid his age (well, 10.5 hours is enough, but he rarely gets that much). He doesn’t go to bed until 8:45 and then I’m in his room until somewhere between 9:15 and 9:45.  I’d love to put him to bed at 8:30 and walk out after tucking him in, but I don’t think that’s in the cards for us.  He just isn’t ready to settle down at 8:30 unless he’s had no nap, which is not an option in this house.  He now wakes up between 7:00 and 7:45 each morning, which is a huge improvement from the recent days he’d wake up at 6:00.  Holy hell, those were hard mornings – and they lasted for months and months and months.  I am now awake before him which means I’m a rested, happy mom when he wakes up.  I make a point to rush to the hallway to get him (we keep a gate up so that he can’t accidentally fall down the stairs if he walks in his sleep) and I always flip on the lights and celebrate the morning.  When he was getting up at 6:00 AM, there was nothing to celebrate.  HA!

Just recently, Matthew started making bedtime a bit easier on his old mom.  Instead of laying with him for 30-60 minutes each night, that dropped down to 15-30 minutes each night.  I was more than happy with this, and honestly, I do love snuggling with him.  When he dropped down to only needing 15-30 minutes of my time, he also started shushing me when I’d try to sing to him.  I don’t remember the exact last time I sang to him, but I do know it was when B was out-of-town on one of his work trips.  I bet it was almost a month ago now.  That makes me sad, but again, I’m out of his room after no more than 30 minutes, so I’ll let the shushing slide!  The one thing that he’s been doing that bothers me, though, is pushing me aside after a snuggle or two.

Matthew loves to pull my arm over him and tuck it in really tight under his left shoulder.  He’ll turn onto his left side but I sure better keep that arm under him (not easy)!  If I move my arm – we start all over.  Lately though, he only lets me hold him for a bit before literally tossing my arm off of him while saying, “no!”  REJECTION!  He’ll go so far as pushing every part of me far away from him so that not even a finger of mine is touching him.  I was offended by this at first, but then thought, “are we on our way to him wanting to go to bed without me?”

I ignored the thought for a long time, only mentioning it once to B that maybe Matthew was moving in the direction of really putting himself to sleep.  This all started when he began napping in our bed – when prior to that – I had to rock him to sleep before putting him in the crib.  As I look back on it now, I’m thinking that moving him to our bed for naps, where I just sit next to him as he drifts off, started teaching him sleep independence.  Each and every nap gets easier, to the point that it doesn’t even matter what I put on the TV (super low volume) as long as it’s not a cartoon.  I keep it kid-friendly, but honestly, he doesn’t care anymore what’s on.  The minute the TV goes on with something that has to do with construction trucks (that’s my go-to theme), he settles down and drifts off within a few minutes.  Nap time has never been easier.

So getting to the point of this post.  I only mentioned once to B that maybe Matthew was getting ready to go to bed by himself because of his independent actions each night.  I said that once we’re back from our Colorado trip after Christmas, that that’s when I’ll push the issue of getting him to go to sleep on his own.  The conversation was over with a plan in place.  But I kept wondering each and every night if I could have left the room earlier, after he rolled to his left side after tossing me aside.  But I’ve not had the guts to try.

Last night, there was a bit of an accident in our house.  I had hung up some glass prints of Matthew from his 1-year-old session above his closet and they’ve been there for a month or so.  I hung them with temporary nails just to be sure on the spacing before putting the screws in the wall that came with the prints.  However, the nails seemed to work just fine and after opening and closing the closet doors several times to check stability, I figured the nails would work.  B came home from his trip to find the prints up and was OK with the nails since I said I tested them.  He did say that screws would be better, but meh, if nails work, they work.  They worked – until last night when I was getting clothes out of the closet for the next day and the biggest print (16 X 24 or so) fell on my face – splitting the bridge of my nose open.

It was a pain, and shock, like I’ve rarely known (much like when I took a water ski to my nose several summers ago) and I wasn’t even sure what had happened.  I just held my face and cried, literally cried, for B.  He told me not to look at it and to get dressed (I was in my jammies).  I listened to him and didn’t look until I heard him on the phone with someone, asking them to come to the house so he could take me to the ER for stitches.  Then I looked, and I sobbed some more.  My face, my face, my face!  I couldn’t stop sobbing.  HA!  Anyway, the neighbor ended up taking me to the ER (no stitches, just a butterfly bandage) leaving B at home with both boys – awake at bed time.

But I also figured I’d give it a try tonight because if this was our window of opportunity to do this without a struggle, then why not try?

And try I did.

And I (we) succeeded.  I laid with Matthew for 10 minutes exactly (that gave him time to tuck my arms around him, and then toss them off of him!), tucked him in, said goodnight, and walked out.  Not a peep.  I quickly grabbed the monitor and saw his little eyes glowing in the night vision view.  But he didn’t move much, aside from a flip from side to side.  Within 20 minutes, he was asleep.

It was that easy!

How could I have not read the cues sooner (like a few weeks ago)?  Why did it take an emergency to figure out how to put my kid to bed?  I suppose it doesn’t matter – because all that matters is that for two nights in a row – Matthew has put himself to sleep without even attempting to get out of his bed!

I tried, and I succeeded!

(Unlike how I tried to securely hang those pictures, and failed.) 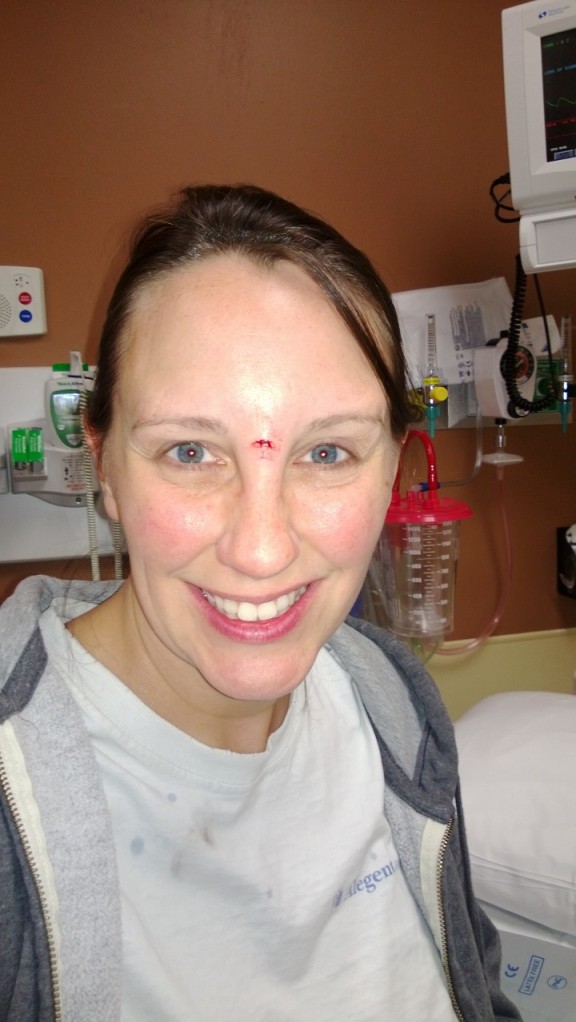 It took a painful injury to convince me that my son was ready to go to bed on his own!

My hope is that this is my LAST post about Matthew’s sleep habits.  Let’s all cross our fingers!