Well… we did it!  We didn’t even plan it – it just happened.

My friend, Denise, came over with her daughter who Matthew thinks is his girlfriend.  He LOVES showing off for her so immediately took her into his “new room” to show her his bed.  He climbed up on the bed and they played and laughed with his stuffed animals.  Upon seeing this, I turned to B and asked, “do you think we should let him try sleeping in here tonight?”  He said we should give it a go so we did.

It took me a full hour to get Matthew to settle down for bed last night.  He kept sitting up when I’d try to escape and point to the bed and say, “sit down, sit down.”  What can you say to that besides yes?  I mean, really!  He finally drifted off and I escaped at 10:15.  He woke up at 1 “something” and I went in immediately.  He has bed rails up, but he could get down if he tried or was pushing himself around in bed in his sleep (which he does do), so I was ready to go in instantly (I didn’t sleep well last night.  SO NERVOUS!).  I ran in, laid down next to Matthew and calmed him, and that was it.  Or maybe it wasn’t, because I thought I was awake but came back to bed at 2:12 – so I may have been in there longer than I think.  HA!

Matthew then stirred again at 4 but was settled before I could get out of bed.  He woke up at 6:15 (an hour earlier than normal) and we got him up for the day!  The new room is a lot brighter than his current room due to the arched window up above the main window.  We did put blackout curtains over the blinds that were there, but that top window lets so much light in that if he stirs in the AM hours and notices the light, he’ll be up for the day (until he gets used to it, that is). 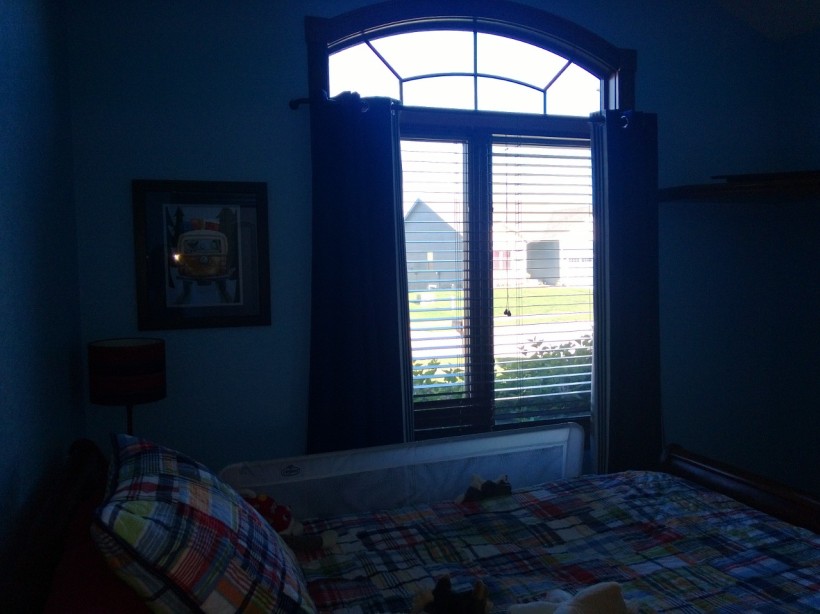 This is a terrible picture, but here are the curtains and print hung up! Those curtains to block the light well!

We started bed time a little later today because Matthew napped super late due to an “almost nap strike.”  He only slept 8 hours total last night, so I insisted he nap and tried 3 times to put him down (he is still napping in his crib due to the light).  I started singing to Matthew tonight at 9:20 and was out of there at 9:48 – a total of 28 minutes!  Last night took an hour.  We’re making progress!

This is not at all how we planned to do this.  We planned to start him out in his new crib for naps starting today and let him sleep in the crib at night for a few weeks, but he seemed so enamored with his new room (which isn’t even finished yet!) that we figured we should do it at night when it’s dark.  So we totally changed our plan and it’s working.  I know that this is working as it is because we’ve had the bed setup for weeks and we’ve been letting him play in his new room since then – so he really likes it.  I just don’t think it would be going this well if we’d converted his crib to the toddler bed or full bed – because it would have been totally foreign to him.  But who knows!

And who knows what tonight will bring.  I may be eating my words tomorrow!

This is my contribution to the Monday Snapshot over at PAIL Bloggers.  For more cute kids, click here!