We’ve had a pretty darn good week around here, but there have been sprinklings of sadness along the way.  In times like these, I like to really focus on the good stuff, the stuff that keeps my heart happy.  With these two boys, Hottie, and the Thanksgiving holiday, I’ve done a pretty good job of keeping my head up while my heart’s been heavy.

It was another productive week around the house.  We’re getting pretty good at starting and wrapping up projects within a weekend.  Our garage is organized (enough), more stuff is sold, a Christmas tree was chopped down and moved in, and Bryson’s car seat is now properly installed.  That’s enough for one week, I think!

Favorite Parenting Moment of the Week:

My boys get along really well, until they don’t.  Recently, there’s been a lot of nit-picking and fighting over ridiculous things (and so it begins, right?).  One of the things that makes them absolutely CRAZY is the little trike we let them ride in the house.  It really is Bryson’s because it’s his size and Matthew has a bigger one that he fits better on, but they both love to ride the little trike and will stop at nothing to get a chance at it.  Bryson is very possessive and likes to HOLD his trike in his lap when he’s watching TV.  This does not count as being in his possession or use so Matthew will often times walk right up and take it from him.  So the cycle begins.

But the other day, they were fighting over the trike and then… silence followed by… laughter.  They came in riding together like this, and now they do it every day, many times a day!  No, it’s not terribly safe and yes, Bryson’s head comes to many dangerous spots at that level, but they’re having fun together and solving their own problems without us.  WIN!

Favorite Outfit of the Week:

Hottie’s coworker texted me on Saturday morning and said she was picking me up for an in-home craft show right near our house.  It had snowed, we were snowed in, so I said, “yes please!”  Once there, she bought nothing and I bought this awesome orange shawl.  I absolutely love it and it is WARM,  but of course, it started unraveling that night.  It’s currently at the tailor’s being fixed making my “craft show shawl” even more expensive than I wanted to report here ($40 for the shawl, $7.50 for the fix = $47.50 for a blanket with a hole for my head).  But… it’s my favorite color and I really LOVE it!  Paired here with EB straight leg jeans and Born boots (along with an ancient Ann Taylor brown turtleneck).

Favorite Meal of the Week:

This one is easy – Thanksgiving (Thursday), of course!  Hottie’s parents do not enjoy cooking like we do, and if you’ve read me long enough, you know that holiday meals are not as tasty as I’m used to having been raised by a guy who loves to cook.  Every year, Hottie and I take more and more on and this year, we covered LOTS of bases!  We brought homemade coffee cake (baked the night before to save time), homemade apple pie (baked a month ago and frozen), butternut squash soup (made and frozen 2 weeks ago), and peppermint and mint-chip ice cream bars (made two days ago).  When we got there, we cut into the coffee cake and then we basically took over the kitchen and cooked together for a couple of hours.  We didn’t want a dinner without gravy so we winged it with a milk gravy recipe I found online and it turned out great!  I’m not sure how ONE person could have made the gravy – it was THAT complicated – but that doesn’t matter since there were two of us.  We finished up the turkey, casseroles, and stuffing and made mashed potatoes – dinner was served (oh, and we brought wine… lots of wine).  Dessert was an hour later and along with the pumpkin pies and peach pie that Hottie’s mom made, we had lots to choose from.  All the kids had my ice cream bars, I had apple pie and half an ice cream bar, Hottie had pumpkin pie and apple pie, and Bryson had “crunchy cake” (coffee cake).  Everyone was HAPPY! 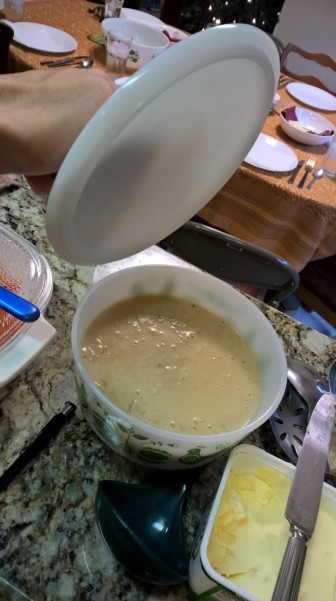 Turkey gravy made from onions, drippings, flour, and lots of milk! 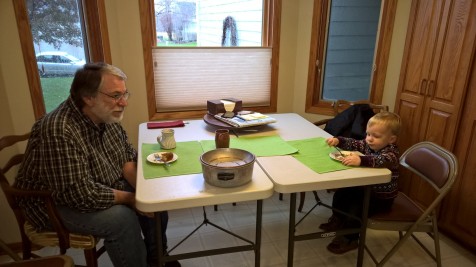 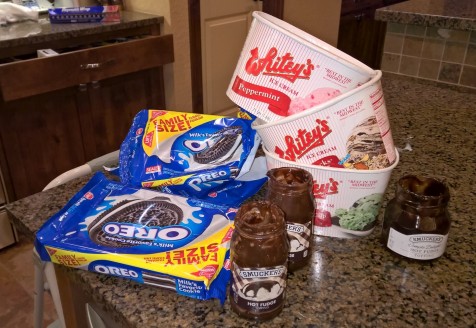 Favorite Purchase of the Week:

Favorite Project of the Week:

I wasn’t even a part of this project, but got in on the tail end.  On Wednesday, Hottie and I decided that Matthew needed an outing with just his dad, so they went to the tree farm.  I am told that once there, Matthew took his job of picking out the tree very seriously and grabbed his measuring stick before heading out on his hunt.  He found a great tree after much deliberation and insisted on helping the dude load it up on the truck.  Hottie said that Matthew watched very carefully to make sure that our tree made it back to the parking lot where they tied it to the roof of the car (there is just something so festive about that!). 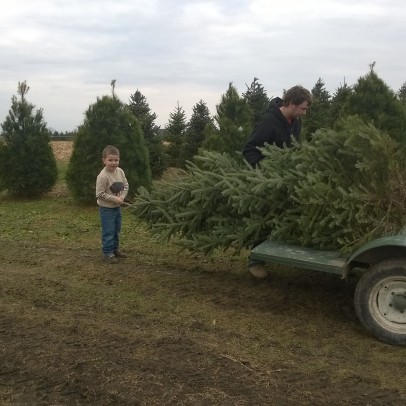 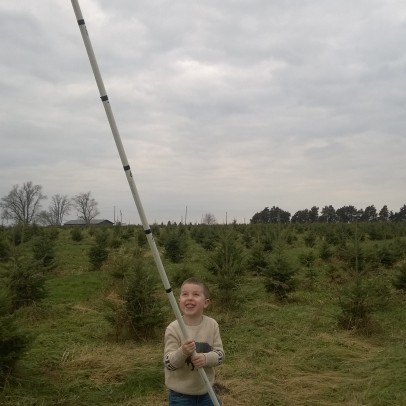 They then headed to the mall and that’s about when Bryson woke up so we went there too to hit up the PBKids 20% off sale for Bryson’s comforter.  As we pulled into the parking lot, Bryson yelled out, “It’s a Christmas tree car, Mom!”  He spotted OUR car with OUR tree on top, but didn’t know it was ours.  It was adorable, and fun!  We took photos! 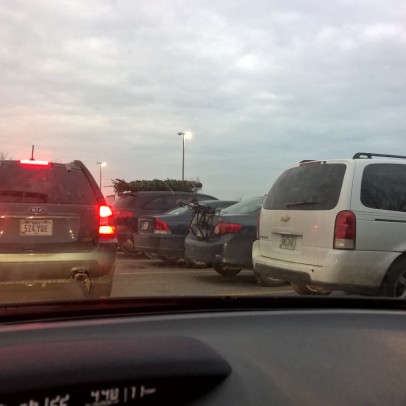 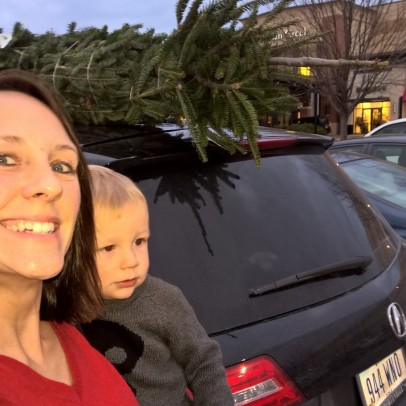 I had to take a selfie!

After playing at PBKids, eating dinner together as a family at chick-fil-we-hate-gays, and checking out all of the super fun mall kiosks (groan), Hottie decided to take Matthew on one more errand and I kept Bryson to pick up a very special gift.  It took FOREVER to get Bryson to the other end of the mall without a stroller, but we had nothing but time.  He spotted the mall strollers in the shapes of fire engines and, well, we were there for quite a while playing firemen.  I forgot how easy and fun it is going to the mall with just one kid! 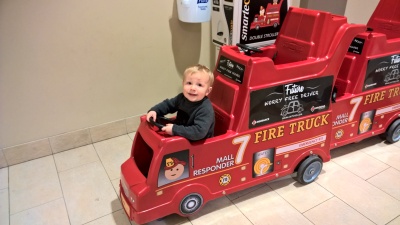 Favorite Realization of the Week:

This is a big one… and one I’m not proud of.  We decided to turn Bryson’s car seat around to be front facing (yes, I know the research, please don’t send me resources) and his seat is different from Matthew’s and the Britax.  I absolutely despise his seat, but it was the best option at the time (I needed a full convertible from infancy to 120 pounds in a booster.  I LOVE Matthew’s seat but it has a 30 pound weight minimum and is forward facing only, and we needed this seat when Bryson was less than a year old).  Anyway, I installed it and forgot that I wasn’t installing one of the easy seats, and I installed it WRONG!  Not only did I not thread things properly, I also didn’t know about some extender that needed to be put on his chest straps.  We drove to and from Hottie’s parents’ house (1 hour each way) on Thanksgiving with our child in an improperly installed car seat.  Good God.  The only reason I even thought about it was that he couldn’t sleep in it, it was tilted too far forward, so I researched the recline.  Turns out, it was all screwed up.

So – his seat is not properly installed and no harm no foul… but I still hate that seat! 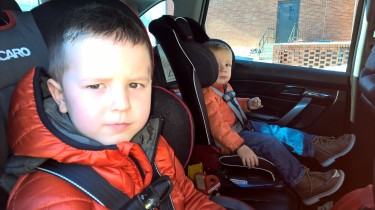 Favorite Photos of the Boys This Week:

One of our trees is up and decorated!  Matthew insists on decorating every single night, but we’re not fully ready yet.  So… I got out his little tree and set it up for him.  He lost interest quickly, because he said his tummy hurt from all of the food.  Bryson and I lit and decorated the tree for him and an hour later, Matthew spewed all over my bedroom floor.  Huzzah! 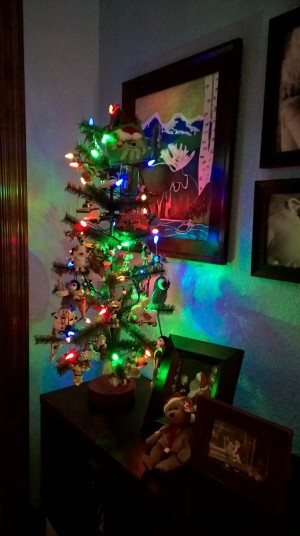 2 thoughts on “Friday Favorites – Holiday Season is On!”