We have all been sick for 3 WEEKS.  Bryson got a one-way ticket to the doctor the minute they opened for walk-ins at 7:45 on Tuesday because his eyes were crusting over for two days every time he slept.  He has a sinus infection and the doc put him on antibiotics.  His eyes are better, but he’s got a fever today – awesome.  Hottie went to the doctor on Tuesday because both of us are so down and out every night with a wretched cough and it turns out we both have bronchitis.  We’re on antibiotics.  Matthew has a nasty cough, but otherwise, is fine (after a major fever and puking last Friday night)… for now!

But there were a few shining moments…

Favorite Parenting Moment(s) of the Week:

For the first time in my life, I made caramel apples!  I’ve never wanted to do it – but something got into me (or out of me… ummmm… BCP from hell for 20 years) this year and I bought the apples while preparing to make my winter stash of apple pies (3 large in the freezer, 1 oh-so-cute-mini-pie).  I didn’t short-cut it with the caramel wraps either – I bought the caramel cubes and melted them on the double broiler with Bryson’s help.  Bryson LOVED stirring and then watching me cover the apples.  He had me dip them in the sprinkles, but he kept a close eye on me to be sure I was doing it right. 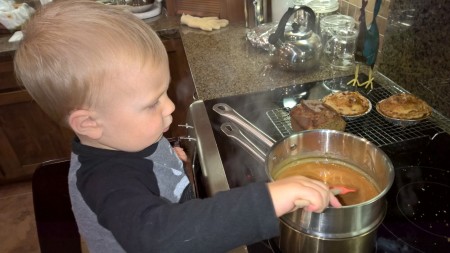 No one ate my apples, besides me.  They were good.  I had 2 in one day, gave one to a little girl who visited with her mom, and did myself the favor of tossing the other one out.  I really felt like I was maximizing the holiday spirit of fall by doing this, even if the kids could have cared less about them.  HA!

Another favorite parenting moment happened this week as late on Friday as it could have happened.  After trick or treating, Matthew wanted to take his glow stick to bed with him, and of course we said yes.  When he falls asleep at night, I can’t see his face because it’s so dark in his room and because he wears his Hawkeye hat to bed and the bill shadows his face.  But tonight, his glow stick lit up his face under the bill of his hat and I got to watch his little eyes drift off to sleep.  It felt magical.

Favorite Outfit of the Week:

I waited forever for this shirt from Etsy.  It was worth the wait!  I love it, and I love the thin sweater under it.  I bought the thin sweater for our Christmas photos that we had taken on Sunday, and it turns out it’s quite versatile and turns my short-sleeved shirts into winter fashion.  The boots are new, also bought for family photos, and they could not be more comfortable.

Favorite Family Time of the Week:

Hands down, my favorite family time spent this week was at the pumpkin patch!  Hottie had taken Matthew to this small pumpkin patch just the weekend or so before, but we hadn’t gone as a family yet to a local patch and time was running out!  It was windy – gusts of 30 mph – but it was fun!  We got the obligatory apple cider donuts, went on a tractor wagon ride, and picked out some gourds.  It was great! 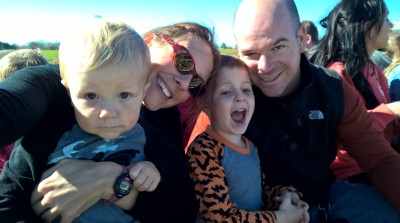 Favorite Purchase of the Week:

I bought frames for my paintings!  I had to get a custom one for my hummingbird painting because of its size and when I picked it up today, the framer taught me how to frame my own canvases.  I grabbed a couple of frames for the two sizes I knew I had at home and anxiously tackled the project the minute I walked in the door.  Framing the moose painting took it from my least favorite, and one I’d considered just putting in the closet and painting something different for his room, to, “Oh my god, I freaking LOVE it!”  I knew the plane would look great framed, but I did not expect to love the moose so much!

Favorite Project of the Week:

As everyone URL and IRL knows, my favorite project of the week has been preparing to sell my in-law’s vintage finds!   We’re headed there this weekend to take better photos, get some measurements, and plan my work!

FB doesn’t always give me a “two years ago…” memory and honestly, I can’t figure out when they do and don’t do this.  But when this little gem popped up, I melted.  I instantly made it my lock screen photo on my phone.  This is my favorite photo of Matthew from babyhood, I cannot get over it.  Getting this little pop-up memory encouraged me to print a my.so.cialb.ook for the year Matthew was born, and I think it arrives Monday (I paid for rush shipping, I was feeling so nostalgic!).  I am so excited to take the time to page through the first 6 months of his life! 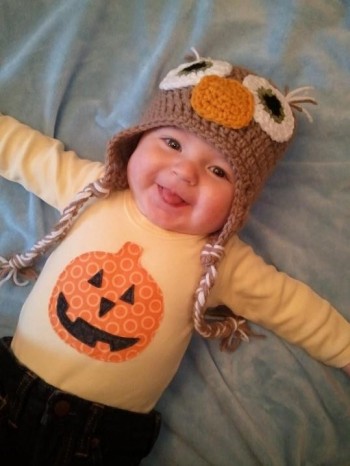 Favorite Realization of the Week:

Sleep begets sleep.  YES, I was told this over and over and over again while trying to get my kids to sleep longer and longer, but this was not true for Matthew.  The earlier he went to bed, the earlier he got up.  We’ve only noticed since dropping Matthew’s nap that going to bed earlier is not making him get up earlier.  We’ve been progressively moving bedtime back for both boys and have landed at 7:45 for Bryson and 8:00 for Matthew (he’s dozed off by 8:15).  I don’t know if it’s the recent sickness for Bryson, but he has finally gone from a 5:30-6:00 riser to a 6:30-7:00 riser.  He slept until 7:20 yesterday, a good 10 minutes AFTER Matthew woke up.  Bryson has never slept longer than Matthew – NEVER.

Of course, Bryson was up at 6:20 this morning (Saturday) but he did sleep 2.5+ hours for his nap yesterday so I’m not concerned.  He’s gotten a lot of sleep lately.

I fully expect DST tonight to mess this up for me.

Favorite Photos of the Boys This Week:

Taken by Daddy during professional family photos – Matthew wanted a photo of downtown!

Matthew’s class party with the craft I created. More importantly, that’s his girlfriend next to him 🙂 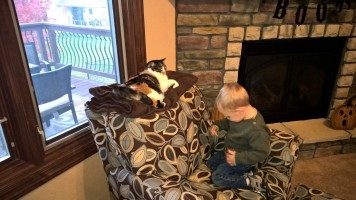 Showing Janie the train on his sweater 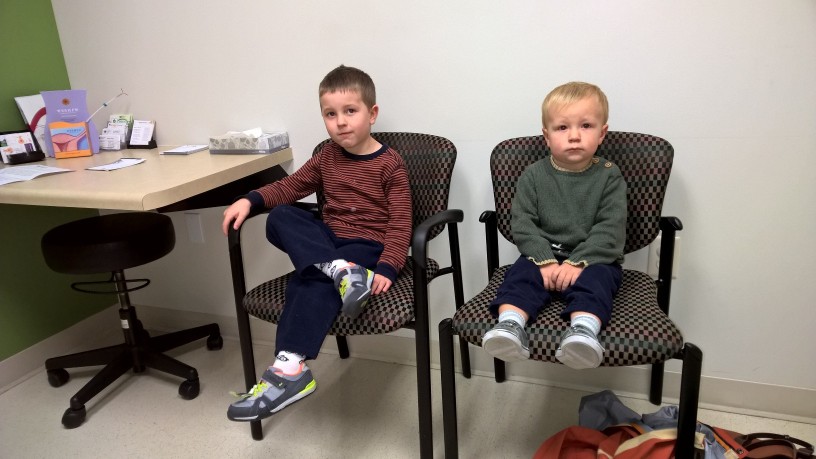 I looked up and saw a teenager sitting there!

5 thoughts on “Friday Favorites – From a Rough Week”