Week 3 of our Paleo Adventure is here!

B signed me up for an introduction to sailing class, so I’ll be doing that each night this week and missing dinner at dinner time.  Because I’m enjoying cooking so much, I’m still going to prep and cook as much of each meal as I can every night before B gets home.  That way, there should be food left for me for dinner that night or lunch the next day.  I picked out of all of the recipes for the week and we went to the store tonight as a family to get all of the ingredients.  We are finding that each week costs about $150 for the fresh meats and veggies.

Everyone says that meal planning each week makes things easier, and I used to just nod my head and think, “yeah, yeah, yeah.”  It turns out, I really like planning each week because it gives me a chance to mentally prepare for what’s to come and the effort that will be needed to make each meal happen.  This is helping me manage my time during nap time and after the kids get up and are playing without me.  I also like having the fridge stocked for the week and working through the items on a daily basis.  I feel real accomplishment when the fridge starts to become bare and it needs to be reloaded by Sunday morning.

I blew it today at lunch because my fitness plan allows a free day, and I figured that I needed to take advantage of it after skipping breakfast and sleeping until 11:45 (thank you, B, for taking the kids this morning!).  I had an awesome breakfast sandwich and some (not all that came with it) hash browns and I would not take that back for even an instant.  But after that meal I knew I had to reel it in for dinner.  We had a shrimp dish planned but B suggested we just get food at the grocery store before stocking up for the week, and I agreed.  The kids napped late and there was no reason to rush ourselves at home trying to get dinner going.  I had a baked skinless chicken breast (fresh out of the oven) and steamed cauliflower and asparagus.  It was pretty good – I was satisfied!

This recipe is one to keep handy at all times.  It was fantastic (the second time around)!  I prepped everything, including the curry spread, during the day but forgot to tell Poor B about the fixings – so he just made the patties and curry cauliflower I had waiting in the steamer.  Shoot!  He loves a good mayo concoction any day of the week.  He also forgot about the prepared lettuce leaves, so he was just eating meat and cauliflower – but still liked it.

I cut the recipe in half and used ground bison instead of beef just to shake things up.  The recipe made 5 small patties and I asked B to save two for me – which he thought meant not to cook two of them.  I came home from my sailing class STARVING with no food to eat.  But this worked out because I got to make them the next day for an early dinner with the proper garnish and they were TO.DIE.FOR.  I even had the apple slices ready to go – so they were just as pictured below.  I let B have the first bite since he got screwed the night before, and he loved it (he only got a bite – the rest was for me before sailing class!).  Because we have a lot of curry spread and lettuce leaves ready to go in the fridge, B asked me to make it again on Wednesday.  No problem!  I’ll make it with grass-fed beef though, like the recipe calls for. 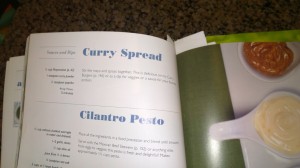 Yes – I made the Greek Chicken again from week 1.  I told knew it would be in our weekly rotation!  Honestly, I could go without it next week just for a change-up.

I got the chicken and asparagus prepared while the kids napped and before I headed out the door to my weights class.  I wrote up the quick baking instructions for B and left everything there for him to make the night easy for him (sailing again for me!).  I messed up the recipe again like I did in week 1 and seasoned the wrong side of the chicken.  DAMMIT!  Poor B loves a crispy chicken skin and he had none to eat because he forgot to carve it off before carving the entire bird, and it got destroyed when he flipped the bird breast-up.  He did say that the meat was super moist again, and I do attribute that to cooking it upside down.  HA!

Here is a photo of my meal prep – I am pretty proud of how easy I’m making things for B after his nice gesture of signing my friend and me up for sailing classes every night this week!

I meant to make this recipe again with beef instead of bison (the recipe calls for beef), but it turns out when I went to mix up the patties that I took frozen veal out to thaw instead.  We don’t buy veal.  Ever.  Our grocery store stocks the veal next to the lamb and grass-fed beef, so it appears that I selected the wrong thing.  Knowing that the only problem we had was a moral one, and let’s face it – the veal was already purchased and in my house – I decided to just use the veal.

B made dinner (I was out with a friend) and remembered the apple, curry mayo, and lettuce this time and said it was good, but was better with bison.  We have yet to try it the way the recipe calls for it to be prepared, but we’ll likely stick with the bison for this one.  B did hold back 2 patties for me so I had them the next day and they were great – just a touch more bland than I’d normally like.  A winner once again!

I prepared mushrooms for B to sauté because it just made sense to serve this with mushrooms, and B really liked that.  The boys ate the curry burgers with enthusiasm – Matthew thinks it’s meatloaf.  OK!

This was my final night out with my friend for sailing lessons, and I tried a recipe last week that I knew B would love!  So I prepped that for him tonight and let’s just say that it is his favorite so far.  This one is so easy, and so incredibly tasty!  I cooked up the bacon way ahead of time, but didn’t cook it as long this time which helped me get it wrapped around the pineapple better.  The shrimp just had to be thawed and I made the sauce so that was ready to go.  I had B make green beans which are way boring, but the kids ate them and that’s all that matters.  B just ate the entire plate of shrimp, bacon, and pineapple!

Oh my goodness, this was great!  Just cooking up the squash got me in the mood for fall.  The meat filling was terrific and was easy to eat on its own – but even better in the squash.  We passed the meat off as meatloaf to Matthew which worked – sort-of.  The pear and pork combo is just to die for!

I didn’t serve this with a separate veggie because the squash was the veggie (and it has carrots).  It was good!  We’ll make an extra one next time – we only made 2 (4 halves) and we both wanted more.  B ate the remaining meat filling since there was no more squash.  Sadness.

We had B’s nephew’s birthday party out of town and decided to check out a local festival on the way home.  We ate at an Italian place.  It was not Paleo.  It was not healthy.  But they had dessert pizza.  This week has not been good in terms of falling off the wagon (wine with my friend twice this week).  Next week is going to be better.

One thought on “Paleo Week 3 – In The Groove”