This marked our first week of going Paleo for B and me (the boys are already primarily Paleo in their diets).  The week went really well and I did the bulk of the cooking, which I’m really enjoying.  The cookbook we’re using is “Everyday Paleo – Family Cookbook” by Sarah Fra.oso.  We’ve really enjoyed getting familiar with the recipes and how they’re designed.  No portion sizes are given – she just says, “serves 5” or something similar.  I’ve learned to read that first before planning any meals – we don’t need 2 pounds of sirloin to share between the two of us!

B made these awesome pork and apple sliders.  They were to die for and we did not modify the recipe at all.  We used Boston Bib lettuce as “buns” and it was perfect!  We paired them with the worst steamed green beans of all time (yes – legumes – we had fresh ones in the fridge to use up and the boys love them) but that didn’t matter because the sliders were THAT GOOD! 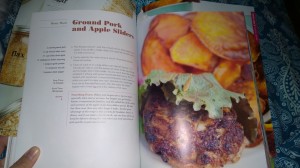 I made tomato soup and it was pretty good – but required some doctoring.  We added cayenne pepper, dried basil, and Bavarian seasoning to it.  I put a bit too much garlic in it.  I did not puree the soup long enough and it was chunkier than we’d normally prefer, but still good.  I used shredded rotisserie chicken as a topping – I felt no need to make my own chicken. 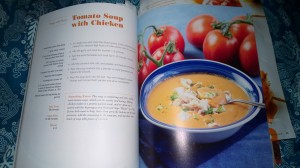 Meatloaf is a big hit with the kids, but since we keep them on a rather strict Paleo diet, we get pretty frustrated with the amount of bread used in traditional meatloaf.  We were excited to try these mini-meatloaves and they didn’t disappoint.  B had made the ketchup on Sunday so that was nice to have ready to go.  I added cayenne pepper, which was a nice kick.  We both agreed that we’d sauté the carrots and garlic first before mixing with the meat next time.  They were a bit too crunchy and at times, we felt like we were eating raw garlic.  We also realized that with a non-stick pan, there was no need to grease the pan.  We paired this with mashed cauliflower made with coconut milk and it was great! 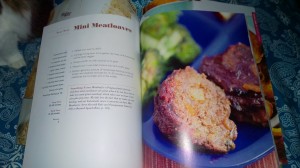 The ketchup that B made is just awesome!  We did add some of it to our pork sliders, but used the rest of the jar to top off our mini-meatloaves.  B prefers to puree it next time to smooth it down, but I love it the way it is! 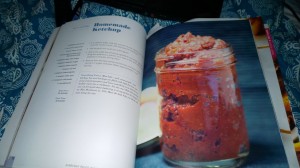 This is the big winner so far!  I would put this meal into our weekly rotation for sure.  We were both looking so forward to making these Mexican skewers!  I prepped the marinade in the morning while the kids were up and got the meat marinating by 10:00 AM.  While they napped, I put the meat and tomatoes on the skewers and wrapped them in foil before putting them back in the fridge for more marinating.  I also steamed up some Brussels sprouts (with just garlic salt) and then put those on different skewers so we could just grill everything together (and crisp up those sprouts – yummy!) when we got home from swim lessons and kickboxing.  This worked out great!  They were perfect and the only thing we’d change is adding mushrooms to the skewers.  We would serve them again with Brussels sprouts for sure. 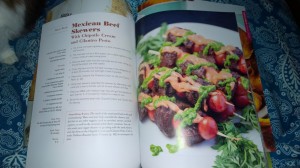 The best part of this meal was the finishing touches – the sauces!  I made the chipotle cream sauce and cilantro pesto as the kids napped and the recipes were spot-on – they took just 5 and 10 minutes to make.  Everything was in the fridge and ready for cooking at 2:30.  The combo of the cocoa marinade and the two sauces was ridiculous, and the pesto was great on the sprouts! 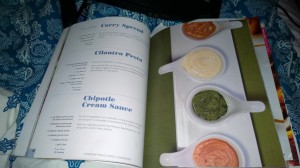 * A quick note – we had a lot of pesto left over so we saved it for later, hoping we’d find something to make with it.  Turns out, there is a breakfast egg recipe that calls for it, and B made those Friday morning and they were AWESOME!  We still have pesto leftover, so we’ll be making the eggs again this week! 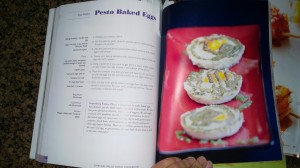 This soup was fantastic – FANTASTIC!  B and I both frequented a place here in town, long before we met each other, and we both still talk about how great their chicken tortilla soup was (the place went out of business eons ago).  Whenever we have a chicken tortilla soup anywhere, we compare it to Mondo’s.  After having one bite of this soup, I said, “This is just like Mondo’s, but without the sour cream, tortilla strips, and cheese!”  He said, “I KNEW you were going to say that – I agree!”  And you know – it was just like Mondo’s.  We’ll be making it again, but we have enough leftovers that we won’t be making it for at least a week.  HA! 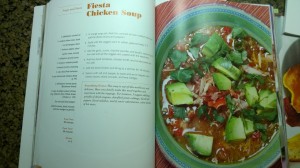 I did make a slight modification.  When they said salt and pepper to taste, I took that very loosely and decided that cayenne pepper would be better than regular pepper.  And I probably put in 1/2 a teaspoon of chipotle seasoning because you can’t beat chipotle flavor.  Oh – and I did put some cheese on top.  I couldn’t help it and desperately needed the calories after the workout I did this morning!

* A quick note – this made the best leftovers!  We are not into leftovers… at all.  We both agreed that this was a solid leftover meal that made us both very happy!

My in-laws texted us in the early afternoon asking if we wanted them to watch the kids some time this weekend so we could go out.  YES PLEASE!  Because B was leaving town Sunday morning, we asked them to come that night!  We went out to the newest hot spot and both agreed that it was going to be a free day – and we shared a pizza as an appetizer and I had lasagna.  B had lamb.  We both had dessert.  They were not Paleo friendly.  The end.  (Actually no, not the end.  It was DELICIOUS!)

This was terrific!  I cooked the chicken upside down, with the breast on the bottom, and we think that kept the breast really moist.  B wished there had been more eat-able skin, but the skin he did have, he loved.  I put asparagus in with it about half-way through cooking and it wasn’t good.  The asparagus was way too thin (we don’t have a great selection of asparagus here lately, for some reason).  I put 1.5 lemons in my 4 pound chicken and saved 1/2 a lemon to use on the asparagus.  Once the chicken was done, I squeezed the cooked lemons onto the meat and it was to die for!  We cooked 4 garlic bulbs (yes, BULBS) and ate them ALL.  This is a repeater! 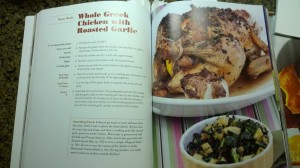