Skip this if you’re tired of reading about my obsession with my kids’ sleep.

So Matthew is sleeping like a champ – I mean – a CHAMP!  We put him to bed at (gasp!) 9:00 each night and he sleeps until between 7:15 and 7:45 most mornings.  If we put Matthew to bed at all before 8:30, we can guarantee ourselves a 6:00 waking and neither of us wants that!  I can’t remember the last time he woke up in the night, so it’s been well over a couple of months now, and he’s going to bed on his own each.and.every.night without fail.  He whimpers when I leave the room, but that’s the end of it and he’s asleep rather quickly.  He’s sleeping between 10 and 11 hours a night (I hear angels singing in my head when I write that!) and is waking up HAPPY!  Naps are happening every single day and they happen with ease and peace.  Because he’s sleeping more at night, even when I wake him after two hours of napping (he would nap over 3 hours if I would let him), he wakes up pretty happy.  He used to cry and cling to me for well over 30 minutes after waking up from a nap, so this is a wonderful change!  All in all, he’s getting 12-13 hours of sleep in every 24 hour cycle.  PERFECTION!

For future (and B’s) reference, I am documenting our sleep rituals.

Bryson’s sleep is getting… better.  Huzzah!

I took the bold step (for me) of moving Bryson out of our room four nights ago on 10/23 and it’s going well.  He’s spent 4 nights in his own room, and he’s only woken up once a night for two of those four nights.  The other two nights, he woke up 3 times before I put him in our bed.  We’re batting 50%, but that’s a hell of a lot better than the 0% we were batting a week ago.  HA!

We made the big mistake of not putting a white noise sound machine in our room when Bryson was sleeping there.  Matthew has used one from the day he came home from the hospital and we take one with us every time we leave town.  Bryson has a sound machine in his room that we use every time he naps or sleeps there, but we didn’t think to bring it into our room when he was bunking with us.  Stupid.  With the white noise sound machine going, his naps and nighttime sleep are both better!

Naps are truly a dream right now for us!  When we’re home in the mornings (not Mon, Wed, or Thurs due to school and gymnastics), Bryson naps in the rock-and-play in his room for 60-120 minutes.  YES – 1-2 hours.  Depending on when he woke up in the morning, I put him down for a nap between 8:30 and 9:30 AM.  This gives him time to nap peacefully but also allows us to grab lunch out because he’s usually awake by 11-11:30.  Bryson will nod off in the car seat on the way home from lunch and sometimes transfers well to the rock-and-play and sometimes does not (today).  Either way, though, I can get him to nap around 1:30/2:00 and keep him asleep until Matthew wakes up between 3-3:30.  That’s another 1-2 hours of naps for Bryson.  He still will take a little snooze around 5:00/6:00 and then we do the bed time process starting at 8:00.

We do not yet see a true rhythm with Bryson’s nighttime sleep schedule, but we have him down by a certain time each night (8:30/8:45) and he wakes up for good around 6:00 AM.  Here is our bedtime routine:

The two nights that Bryson got up only once to eat – he went 4+ hours at a time between feedings.  One night, he woke up at 10:40 (he ate at 7:33 and was conked out – way earlier than I’d have chosen) and then didn’t wake again until 2:32, and then again at 6:22.  The other night (last night), he went 4.5 hours before waking up at 1:25, then again at 5:45.  No matter how many times he wakes up in the night, his first waking is always between 1:00 and 2:30 AM and that’s always after more than 4 hours since his last feeding.  What happens after that first waking is when things get unpredictable.  But again, we’re averaging 50% so far on only having to get up once in the night, so I’m not complaining.

Bryson is sleeping in the rock-and-play for most naps (he naps with me beside Matthew, sometimes, if I’m tired too) and at bed time.  For now, I’ve given up on the crib.  I want to get him consistently only waking once a night before moving him back to the crib.  I was paranoid about this decision but after getting some advice and reading www.troublesometots.com, I realize that I’m just being stupid by obsessing over getting him back into the crib.  As long as he can’t roll out of the rock-and-play, then there is not problem.  As long as he’s swaddled (not during naps, but yes during bed time), he’s not going to roll out of it.  AND – he’s not rolling yet.  My kids sit up before they roll from back to tummy (and he was sitting, 100% unsupported (not even with his hands on his knees), today in a grassy field for family photos!).

We go to Colorado for Christmas on 12/24.  Once we return, I will tackle the issue of moving Bryson back into the crib.  Unless, of course, we get him back in the crib before that just because he wants to be there.

But I’m not losing sleep over it. 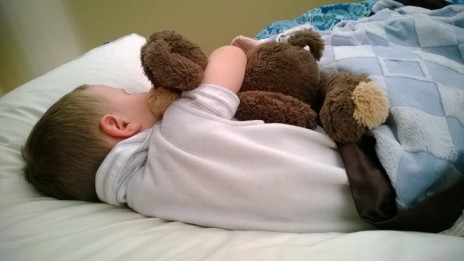 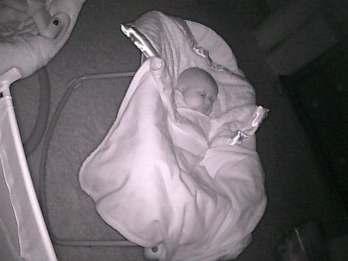 Falling asleep on his own…

*** As I was writing this, B came to get me to tell me that Bryson was crying (at 10:10).  I was nursing him before books tonight and he fell asleep, so instead of wake him for books, I put him in the rock-and-play.  I think he may have woken up and then wondered, “where’s the boob I fell asleep with?”  I’m actually glad he woke up so that I could re-set him, in a way.  I nursed him until he calmed down, put him in the rocker where he cried for a minute or two, rocked his rocker, and walked out.  Looking on the monitor now, I see that he’s still a little awake after I’ve been gone for over 10 minutes – which is a good thing!