I realize that I have been the most boring blogger of all time lately.  I looked back on the last few weeks of posts and saw what I feared – that most of what I’ve been blogging has been about Matthew’s naps – or lack-there-of.  There were four posts in a row that touched on this challenge – and three of those four posts were solely about his recent ditching of naps.

Sleep is a major source of stress for me.  Back when Matthew was 9.5 months old, we (I) finally decided to try the Ferber method with him because nothing else worked.  We tried it all.  And when I say we tried it all – I mean – WE TRIED IT ALL.  I tried every gentle sleep solution book on the market, and all they did was make his sleeping worse.  The Ferber method took a full 14 nights, but it finally worked.  I could put him in his crib drowsy but awake at night (but never for naps) and he’d sleep through the night for 10+ hours each and every night.  He rarely woke up in the night, and if he did, it was for a good reason (sick or teething).  Then, just as we were about to welcome Bryson into the family, I decided Matthew needed to be moved into the new room and queen bed so that the crib could be freed up for Bryson.

Biggest mistake ever made.

Well, maybe not the BIGGEST mistake ever made, but it was a big one.  😉

I have to lay in bed with Matthew until he’s asleep or he’ll get out of his bed and rip the tree decals off the wall.  It would take anywhere from 30-90 minutes to get him to fall asleep, even when he was tired.  I didn’t mind it the three weeks before Bryson was born, but after he came home, I didn’t have that kind of time each night.  But it did not matter – I still did it anyway.  We kept Matthew up a bit later at night so that he may be more tired and the routine decreased to 30-60 minutes.

All the while, Matthew was taking 2-3 hour long naps each and every day in the crib without fail.  He was only sleeping 9 hours at night, but making up for it with his naps.  It was great!  The only problem was that I had to rock him fully to sleep for his naps.

Then, on September 17th, Matthew quit napping in the crib (we never transitioned naps to his bed since I don’t have 30-60 minutes during the day to coax him to sleep). I didn’t know it at the time, but that was the beginning of him not napping anymore unless I did something major to fix it.  I tried napping him in his bed and that was a disaster.  By September 19th, he was done napping.

Or so I thought.

On the 20th, I tried one last time to get him to nap in his bed or the crib and I was beaten and screamed at, the entire time, keeping my cool.  I took him to our room and put on a construction truck video and told him to have some quiet time.  He fell asleep.  He fell into a DEEP sleep.

Today is the 27th, and Matthew has napped in our bed for 6 of the last 8 days.  He’s sleeping beside me right now as I write this.  I have to wake him each day after 1.5-2 hours (I never let him go more than 2 hours anymore).  It’s not ideal, but it works for us.  It works for him.  The only times he hasn’t napped is when I’ve kept him up deliberately because I need him to fall asleep quickly that night (like when B is out-of-town).  His bedtime sleep routine (after books are put away) takes 5-30 minutes depending on the length of the nap earlier in the day.  I will admit that the best nights are those that follow no nap – he is asleep and I’m out of his room in 15 minutes.  But I won’t complain about 30 minutes on a nap day – no way!

The funny thing is, though, that I did none of those things with Matthew.  He was out of our room and in his crib at 5 weeks old, I had him fall asleep on his own for every nap (until he wouldn’t), and I followed all the sleep rules, even if they didn’t make sense to me.  And he’s terrible at putting himself to sleep.  Bryson was great at putting himself to sleep, but he’s starting to need more help.

And I’m starting to be more firm.

I will not nurse him to sleep for naps – NEVER!  That is how everything started going downhill with Matthew.  I remember it.  I remember telling B, “well, that worked great – I’m going to do that all the time!”  What a mistake that was.  I won’t sing and rock him to sleep at night like I did with Matthew.  When it’s time to establish a bedtime routine, I’ve told B that I will sing first, then he’ll read books and put him to bed.  I am not going to be a crutch.  I won’t have my second child napping beside me in my bed when he’s 2 years old.

I have started this post over and over again in the last week or so, and as I was rocking Bryson today, Belle’s post popped up.  I started reading it, and I then suddenly stopped what I was doing and put Bryson in his crib.  I patted his bottom as he drifted off.  I watched him wake up, and put himself back to sleep again, several times on the monitor.  He was fully up after an hour – but I won’t complain about 60 minutes in the crib.  It’s all about establishing good habits, and I have to thank Belle for reminding me of that as I was drifting down a bad sleep path with another child.

I’ve loved my snuggle time with Matthew, but it’s not something I can do again if it causes Bryson attachment issues at bed time.  I will just have to snuggle Bryson extra during the day.

(My afternoon in pictures… 1.5 hours of semi-silence!) 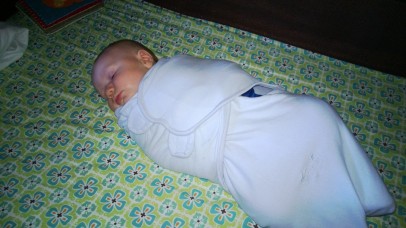 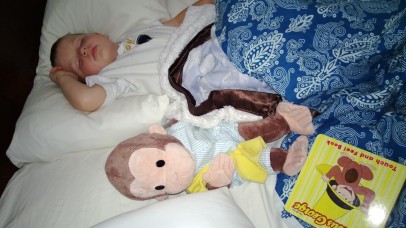