I have to admit something today that I have not had to admit yet as a mother.

When I posted a while back about the top 10 things that surprise me about myself as a mother, some people mentioned that they don’t have patience and my response was, ‘this could all change tomorrow.’

Matthew is a good boy – a very good boy – but man alive, he woke up before the crack of dawn this morning for no apparent reason.  This would normally not be a big deal because when this (very rarely) happens (5 times since he was 10 months old), we’ve known just what to do and he’s back to sleep in no time.  With the exception of that nasty double ear infection, the other few times he’s woken up have been just brief interruptions to our night.

Matthew woke up just plain mad and standing up in his crib, which cues an immediate dash to his room to try to calm him before he wakes up completely.  Too late.  He wanted to get up.  WHAT?  He pointed at the door and wailed.  I finally hollered over the monitor for B to get us some ibuprofen because what does every bad mother do when her kid won’t sleep?  Drug ’em!  The firm holler of mine (I had to be firm so that B could hear it over the sound machine – I wasn’t mad) triggered something in Matthew because he just fell quiet immediately.  I was thrilled.  After the ibuprofen, he settled in to sleep.  GREAT!

But he never fell completely asleep.  He cried and tossed all over me every 15 minutes or so.  I didn’t catch a single wink.

I tried putting him in his crib several times to no avail.  So, I brought him into our room and bed.  It seemed like that was going to work but then he freaked out and we were back to his room.  An hour and a half had passed and I was exhausted.  In his room, there were more random fits because I just think he wanted to be up.  I finally changed his diaper (I don’t usually do that because it wakes him completely up – but what the hell because he was obviously completely up?) and that seemed to settle him.  He finally fell asleep around 6:15 and so did I, with him in my arms.  I woke up at 7:30 and put him in his crib while I got the house picked up.  He woke up at 8:10.

I figured the day was salvaged.

But I was tired all day, and he was crabby and fussy.  He fought his nap but then relented and I thought I’d get some sleep.  Wrong.  Just after I fell asleep, my 2-3 hour napper woke up after 1 hour and 20 minutes.  Ready to go again.

I was really upset, to be quite honest.  I almost cried.

But we played and watched CG with Matthew being fussy and crying intermittently the entire time.  I did what I’ve never done out of frustration – I texted B and asked when he would be home. 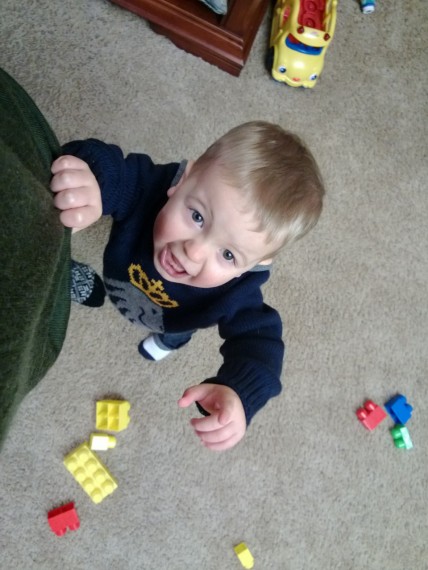 Look at that little sweetheart, yelling at me for God-only-knows-what. This was actually taken the other day, but is totally what I witnessed all.day.long today. 😉