Before I get started, it is important that I tell you that I did not take a single picture at the party.  Not ONE.  My good friend, Denise, was there and she took photos of the whole thing and I don’t have those yet.  She is an awesome photographer (she does all of Matthew’s photos) so I’m excited to see the photos!  With that said – what you see below are photos I took either just before or just afterwards – but nothing during.  I don’t even have a  photo of my cake table!!!  I will post a slide show once I have the “real” photos  😉 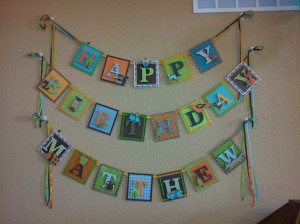 The party went really well – I am pleased!  I was disappointed that we weren’t better drink and food hosts – we left it as a, “serve yourself, feel free to get into our fridge,” kind of party (which isn’t like us), so that was frustrating, but that’s OK.  I prefer to serve people drinks just because – hey – I invited you to a party and I want you to relax and have fun and let me do the work!  BUT – there was too much to handle to be able to do that.  B noted that for the next party, he wants to hire a bartender and I agree!

We had some food, but we didn’t go overboard because the party was at 2:00 and we figured people would have eaten beforehand.  We got our pulled pork started too late and I was of the mind that if it was ready in time, then great – but if it wasn’t, then we’d have it for dinner with my sisters (did I tell you that my sisters came from out-of-town?  SO NICE!  And when I say out-of-town, I mean out of STATE!).  Well, it wasn’t ready and that did not stress me out one bit.  We had homemade artichoke dip and guacamole (B makes the best guacamole), a fruit bowl (strawberries and pineapple because I hate melon), and cake.  Oh, we had TONS of cake! 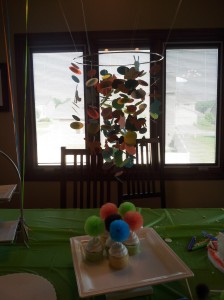 The only cupcakes left after the party (besides a whole box in the fridge). I cannot tell you how much I loved those pom poms!!!

We had 67 RSVP’s and 60 people came.  Only two families didn’t come who said they would – and a couple of families left a child or spouse at home that we were expecting.  I’m totally shocked by the turn-out.  We’ve hosted tons of parties and usually have about a 75% turn-out rate from those that RSVP as ‘yes’ (and if you’re wondering – yes, I have analyzed this data over the years as it helps me plan food and beverages for subsequent parties!).  The turn-out was huge and our house was not huge enough  😉

There was a glitch that worked out in our favor.  The bounce house guy never showed up.  This actually pleased me because it was 90 degrees outside and there was no way that thing was going to get used in this heat!  So I didn’t even call to ask where they were because I was supposed to pay them by cash or check, so I wasn’t out any money.  YAY!  And then?  Our neighbors were here for the party and when I told them about the bounce house situation, they brought theirs over from their house and set it up in our basement.  They have an in-home daycare (we tried to get Matthew in with them but they were full – and then I quit work anyway) and have the bounce house in a room in their daycare.  They had it in our house and setup within 5 minutes.  We owe them a major thank you!  The bounce house was a HIT! 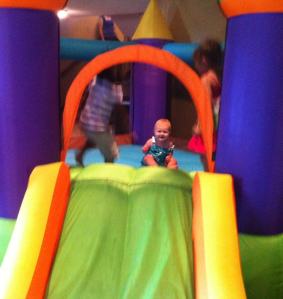 Neighbors J and D save the day by bringing their awesomely HUGE bounce house to our basement for the kids!

We had a ton of balloons and that made me very happy!  I have no idea why I became so obsessed with having lots of balloons, but I did and they sure did make the house look festive! 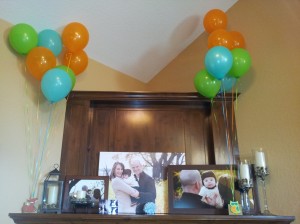 Two of the 5 balloon bouquets – with balloon weights that no one noticed. HA!

The house was sweltering hot by the time everyone was here, and I kept telling people to go to the basement because it was much cooler down there, but only the kids and a few adults went down so the upstairs was packed!  We made the mistake of forgetting to put Matthew’s big toys away (jumper that we don’t even use, hit two activity tables, and his ride-on truck) so the kids that were upstairs were huddled together taking turns with the toys.  It was actually quite cute!

Matthew LOVED having so many friends over.  He was in heaven – absolute heaven.  He didn’t get fussy even once (at least that I noticed) and he mingled with everyone throughout the whole party.  Here I worried that we (I) were doing this all for ourselves but it really was one of his favorite days.  He had his fun cousins here, his best friends, and countless adults to blow kisses at.  I just can’t believe what a great sport he was through the whole party and then afterwards with our late guests (my sisters and nieces and nephew stayed with us – 6 overnight guests to play with!).  He had no afternoon nap, so he slept very soundly!

Matthew did not like the cake.  He made a pretty good mess of himself with the frosting, but he spit the cake out faster than I’ve ever seen him spit anything out before.  GOOD BOY!  I am anxious to see the cake photos because he was super cute with it!  His favorite part of the entire party (and this brings tears to my eyes) was when the entire house sang “happy birthday” to him.  He applauded as we all sang and continued applauding until we were done singing.  It was precious (and so memorable!)!

We have way too many toys in this house now, thanks to our wonderful friends!  Matthew was not into opening his presents but we had plenty of kids on hand to help out.  B’s coworker’s son, who is 9 and crazy about Matthew (which is so fun to see from a 9 year-old boy), distributed his gifts to him, one at a time.  Two of his most un-secret admirers opened his gifts for him and ooh-ed and aah-ed at his presents, trying to elicit excitement out of him.  HA!  They gave him kisses in-between gifts.  🙂  One of Matthew’s favorite girls recorded his gifts for me and I so appreciated that!  I seriously loved every minute of it!  I loved watching all of the kids rally around him to help him open gifts and celebrate!  It was so special!

I’m not sure that there is anything else to record – or at least until I get the photos which will surely jog my memory.  I’ll end this post with what were the most memorable moments to me.